Situation Normal: All Fouled Up

I entered my Creatures 2 world to immediate problems. Sigurd and Bjorn were riding my boat across the ocean, but for whatever reason, Bjorn - and only Bjorn - was stuck inside it, despite all my safety mechanisms. In fact, he was stuck only on the left side of the ocean. He could step out of the boat just fine on the right side, but on the left, only Sigurd could get off the boat. So I carted Bjorn over to the right side, removed my safety rails, and tried to get the Norn into the water so I could pick him up and move him. He grabbed a bee, hopped in, and walked to the middle of the ocean. Er, what? After moving him, I removed and reinjected the swimming Mernorns COB, put my safety rails back up, and hoped that would do the trick while I went through the process of importing and teaching young Norns.
Read more »
on March 26, 2022 No comments:

So, after adding the Medical Monitor and X-ray agents to my world and finding that all the Norns had been rendered sterile, I realized I'd need to start over. It was just a question of how much so - introduce generation 1.5, or full reset? I hatched the existing eggs and found that the population was... skewed. This wasn't going to work. And since I decided to also add the agent that removes seasonal gender bias, I'd need to remake the world again. As such, I've decided to put the second gen creatures up here for download. As before, they come with a mutation report as well as their parents' and their own genome file.

Eden is once again beset by one mysterious problem after another, and I cannot for the life of me tell what's wrong. I was streaming this session for some friends and may have forgotten to take as many screenshots as normal. Oh well!

First, I suddenly lost Meadowglade the Treehugger and Berrycove the Bengal Norn, for no apparent reason. In hindsight, I have a screenshot of Meadowglade shortly before his death that shows high levels of injury, thanks to a sickness I was slow to cure. I imagine Berrycove suffered the same fate.

I also caught Streamivy the Grendel hanging out in the airlock, and pulled him out before he could jettison himself into space, much to the amusement of those watching the stream. I then picked up a trout from the Woodland to airlock and show them what happens when something gets airlocked. The fish disappearing in a puff of smoke kicked off a round of hysterical laughter!

The Tide is Turning 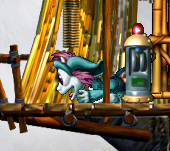 It's been a crazy week at work, and I needed something relatively calm to unwind with. Taking a break from working on my Pathfinder mod, I dipped into Creatures 2 for a while. I figured, with generation 1 winding down, I should get a head start on prepping generation 2 for the world, so I coaxed Magni out of the incubator cave and settled him into his new home in the trees above the swamp.

With the cave free, I could get to work teaching the next generation, so they'd all be ready for the world when their time came. I decided to start with the Mernorns, but there was one catch: they're all male.

Creatures 3 and Docking Station are now on Steam

Labels: C3/DS, Meta
I never thought I'd see this day, but Docking Station and all the breed packs are now available for free on Steam, with Creatures 3 also available for six bucks. Tell your friends!